With the goal of improving health and extending lifespan, Roy Walford was a pioneer in terms of  studying (and implementing) a diet that is calorie restricted but that also contains optimal nutrition (CRON). Unfortunately, Walford died at age 80 from complications related to Amyotrophic Lateral Sclerosis (ALS). Were there any factors in his nutritional approach that increased his risk for developing ALS?

On Walford’s website, http://www.walford.com, he listed 2 sample days of both food intake and his resulting macro- and micronutrient composition: 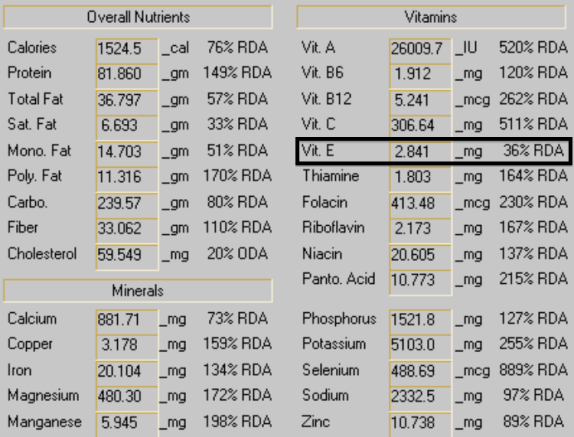 Although several micronutrients (calcium, sodium, zinc) are below the RDA on day 1, Walford’s 2-day average bring these values close to the RDA. However, his Vitamin E intake on day 1 and day 2 (shown below) are glaringly deficient. On day 1, his Vitamin E intake was only 2.8 mg. On day 2, it was 6.1 mg, for a 2-day average value of 4.5 mg. The RDA for Vitamin E was updated in 2000 (Food and Nutrition Board, 2000) from 8 mg to the current 15 mg-he wasn’t close to either value!

Dietary Vitamin E has been reported to be decreased in patients with ALS, when compared with ALS-free controls, as shown below (Veldink et al. 2007). Although the subjects of Veldink et al. had an increased calorie intake when compared with Walford (2842 and 2938 calories in controls and in ALS patients, respectively), when scaled down to Roy’s 1500 calorie intake, a dietary Vitamin E intake of 9 mg would be found in ALS patients, with 10.8 mg found in the controls. For comparison, Walford’s 2-day Vitamin E intake was only 6.1 mg! Interestingly, the only other dietary nutrient category that was significantly different between ALS patients and controls was polyunsaturated fat (PUFA) intake, which was also low (8.8g) in Walford’s 2-day diet.

I’m not at all saying that Walford’s dietary deficiencies in Vitamin E and PUFA caused his ALS. It’s also unknown whether the 2 days that he posted on his website are representative of his overall CRON approach. But it’s an interesting observation, isn’t it?

If you’re interested, please have a look at my book!
https://www.amazon.com/dp/B01G48A88A?ref_=k4w_oembed_omIChDjq2EkggX&tag=kpembed-20&linkCode=kpd

11 thoughts on “Calorie Restriction Pioneer Roy Walford: Where Did He Go Wrong?”