For more info about the day-to-day approach, join us on Patreon!
https://www.patreon.com/MichaelLustgartenPhD

In this video, I discuss data for 6 blood test measurements since 2018 that show a Phenotypic (Biological) Age that is ~14 years than my current age (47y).
https://youtu.be/85t8vmIgR6s

Here’s a recent podcast that was recorded with Julian Hayes II at Optimal Health for Busy Entrepreneurs:

Exactly 1 month ago, my first biological age measurement of 2020 was 32.75y (https://michaellustgarten.wordpress.com/2020/02/14/biological-age-32-75y-chronological-age-47y-first-2020-measurement/). When considering that my chronological age is 47y, that’s a 14 year improvement, but I wasn’t (and still aren’t) satisfied. When I sent my blood for analysis, I was battling a mild upper respiratory infection (cough, no fever), which likely raised my WBCs, thereby resulting in a higher biologic age. Also, I was experimenting with a higher intake of meat, eggs, and cheese, to see what affect that it would have on my circulating biomarkers. On that blood test in February, my creatinine levels were higher than my 2015-2020 average value, and if those foods were associated with circulating levels of creatinine, reducing them should also reduce creatinine, and accordingly, further improve my biological age. I also assumed that all other variables on Levine’s Phenotypic Age calculator would be unchanged.

Because I track my diet every day, I can investigate the correlation between my meat, eggs, and cheese intake with creatinine. I now have 8 blood tests that correspond to dietary data, and interestingly, there is a moderately strong correlation between my average daily beef+egg+cheese intake with creatinine (r = 0.55). Based on these data, I’m going to continue to minimize consumption of these foods, with the goal of optimizing creatinine.

On a final note, I also expected to further reduce my CRP from 0.3 to something lower, but it slightly increased to 0.37 mg/L. While that is far from a high value, lower is better, and in future blood tests I’ll try to figure out how to further reduce it.

If you’re interested in calculating your biological age, here’s the Excel link:

In an earlier post (https://michaellustgarten.wordpress.com/2018/06/26/maximizing-health-and-lifespan-is-calorie-restriction-essential/), I documented my aging.ai biologic age for 13 blood test measurements from 2016 – 2019. If you missed that post, here are those data:

To gain more insight into my 2019 prediction for biologic age, I kept measuring. On September 17, 2019, I had my worst biological age to date, 33y, based on the blood test data below:

Seeing a biological age that high (for me) was the motivation that I needed to finally stick to a mild caloric restriction, which I hypothesized would positively affect my biological age. I wrote about this in my recent Phenotypic Age post (https://michaellustgarten.wordpress.com/2019/11/01/biological-age-31-3y-chronological-age-46y/). Did it work? Shown below is my blood test data for October 29th. 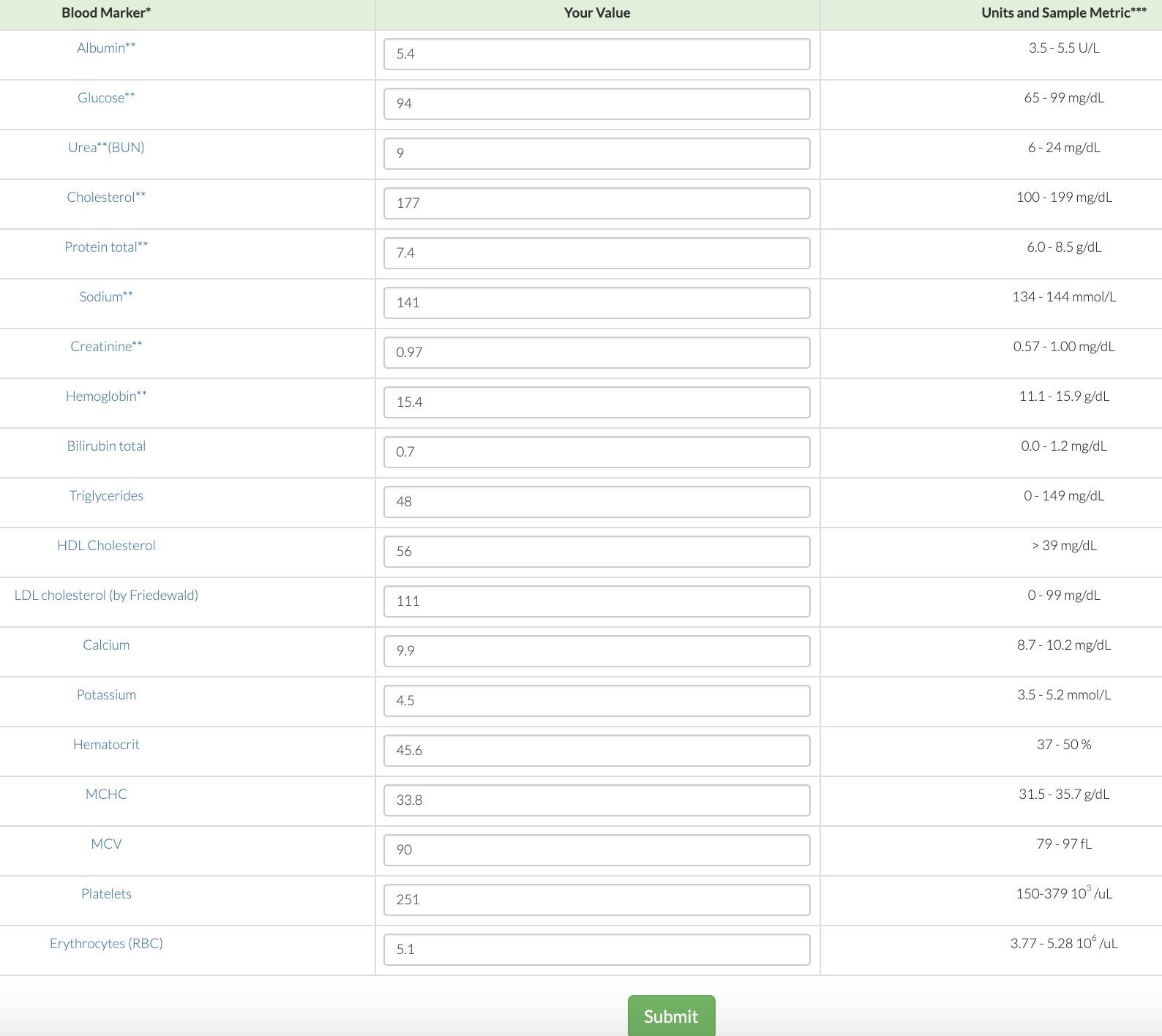 On June 10, 2019 (for the first time) I measured all of the blood test variables that are included in the biologic age calculator, Phenotypic Age, and ended up with a biological age = 35.39y (https://michaellustgarten.wordpress.com/2019/09/09/quantifying-biological-age/).

An 23% younger biological age on 2 separate dates, months apart might be good for most, but not for me. So, I tried again on October 29th, 2019, and voila, a biological age of 31.3y, which is 32% younger than my chronological age! How did I do it?

From my last blood test until my most recent blood test, I attempted a mild caloric restriction. To maintain my body weight, I require about 2800 calories per day, an amount which is based on daily body weight weighing in conjunction with daily dietary tracking. For the period of time that elapsed between my last 2 blood tests, I averaged 2657 calories/day, which is 3.2% less than the 2745 calories/day that I averaged for the dietary period that corresponded to my September blood test. That I was also in a very mild caloric restriction is confirmed by a reduction in my average body weight, which was (purposefully) down 0.7 lbs from September 17 to October 29th, when compared with the dietary period that corresponded to my September blood test (August 20 – September 17).

This is a superficial analysis of how I further reduced my biological age, but in future posts I’ll report the average dietary intake that corresponded to my relatively youthful biologic age!

Alkaline phosphatase (ALP) is one of the 10 variables used to quantify biological age with PhenoAge (https://michaellustgarten.wordpress.com/2019/09/09/quantifying-biological-age). The reference range for alkaline phosphatase is 20 – 140 IU/L*, but within that range, what’s optimal?

Two separate meta-analyses have investigated the association between serum levels of ALP with risk of death for all causes. First, in a meta-analysis of 4 studies that included ~9 million adults, ALP values greater than 48 IU/L were associated with a significantly increased all-cause mortality risk (Kunutsor et al. 2014):

Note that mortality risk increased linearly up to 85 U/L (short dashed line, dark black line), but increased at a much greater rate for values greater than 85 U/L. In addition, the meta-analysis of Li et al. 2014 did not include the 8.9 million adults of Fulks et al. (2008), which were included in the Kunutsor meta-analysis. Nonetheless, the data from these 2 complimentary meta-analyses arrive at the same conclusion: lower ALP values may be better in terms of reducing risk of death from all causes.

What are my ALP values? As shown below, I’ve measured ALP 27 times over the past 13 years, with an average value of 49.4 U/L (black line). Also note the red dotted trend line, which is close to flat over that period. So far, so good for ALP!