Paper referenced in the video:

Fasting drives the metabolic, molecular and geroprotective effects of a calorie-restricted diet in mice https://www.nature.com/articles/s42255-021-00466-9

Prevalence and Ethnic Pattern of Diabetes and Prediabetesin China in 2013 https://pubmed.ncbi.nlm.nih.gov/28655…

Sirt1 extends life span and delays aging in mice through the regulation of Nk2 homeobox 1 in the DMH and LH https://pubmed.ncbi.nlm.nih.gov/24011…

Resveratrol improves health and survival of mice on a high-calorie diet https://pubmed.ncbi.nlm.nih.gov/17086…

Ergothioneine oxidation in the protection against high-glucose induced endothelial senescence: Involvement of SIRT1 and SIRT6 https://pubmed.ncbi.nlm.nih.gov/27101…

A Comprehensive Analysis into the Therapeutic Application of Natural Products as SIRT6 Modulators in Alzheimer’s Disease, Aging, Cancer, Inflammation, and Diabetes https://pubmed.ncbi.nlm.nih.gov/33920…

Effects of Sex, Strain, and Energy Intake on Hallmarks of Aging in Mice: https://www.ncbi.nlm.nih.gov/pmc/arti…

Regulation of longevity by FGF21: Interaction between energy metabolism and stress responses: https://pubmed.ncbi.nlm.nih.gov/28552…

Discussed in the video:

Are there links between calorie intake, cardiovascular fitness (RHR, HRV), and diet composition with my biological age?

Maximal lifespan in calorie restricted (CR) mice can range from 45 – 55 months. In this video, I present data for 3 studies on rapamycin-can it beat CR for maximal lifespan?

NR and NMN are popular ways to try to boost levels of NAD+, but that approach hasn’t worked every time in human studies. One reason for that may involve CD38, which degrades both NR and NMN. With the goal of boosting NAD+ levels during aging, why does CD38 increase with age, and what can be done about it? All that and more in this video!

Circulating levels of white blood cells (WBCs) are one of the 10 variables used to quantify biological age with PhenoAge (https://atomic-temporary-71218033.wpcomstaging.com/2019/09/09/quantifying-biological-age). The reference range for WBCs is 4.5 – 11 *10^9 cells/L, but within that range, what’s optimal?

Several studies have reported that WBCs greater than 5 are associated with an increased all-cause mortality risk (Ahmadi-Abhari et al. 2013, Samet et al. 2005, Weijenberg et al. 1996). While observational studies are important for identifying associations with mortality risk, stronger evidence is obtained when the data from the same subjects are tracked for a long time period. Perhaps the best evidence for the association between WBCs with mortality risk comes from the Baltimore Longitudinal Study on Aging (BLSA), which studied 2803 men and women over a period of 44 years (Ruggiero et al. 2007). As shown below, subjects that had circulating WBCs between 3.5 – 6 had the best survival, whereas WBCs below 3.5, between 6 – 10, and 10+ each had successively higher risk. The 0.5 point on the y-axis of the curve (survival) is defined as 50% mortality, and is the point where half of the study subjects died, whereas the remaining 50% were still alive. At that point, compared with subjects that had WBCs between 6 – 10, people that had WBCs between 3.5 – 6 lived ~7 years longer! So getting your WBC into that range may be a big deal for increasing life expectancy. 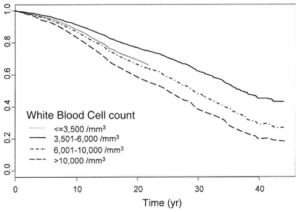 How can you reduce circulating WBCs? One way to reduce WBCs is to eat less calories, thereby reducing your body weight. As shown below, eating less calories resulted in a decreased BMI and decreased WBCs in the Biosphere II project (Walford et al. 2002), almost exactly in the same pattern: 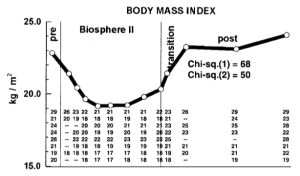 Because calorie restriction reduced WBCs from ~6.8 to 4.6, should 4.6 be considered optimal? In support of this idea, calorie restriction is well documented to increase lifespan in a variety of organisms, including flies, worms, and rodents. Although there isn’t any evidence (yet) on the long-term effects of calorie restriction (CR) on lifespan in people, it has been shown to be protective against age-related diseases, including abdominal obesity, diabetes, hypertension, and cardiovascular disease (Omodei and Fontana 2011). Therefore, a reduced WBC level may be related to the positive health-related effects of CR.

As an argument against using the CR-mediated reduction in WBC as a guide for what the optimal range should be, calorically-restricted mice have a decreased survival in response to infection (Goldberg et al. 2015):

What’s my WBC level? Shown below is my WBC data for the past 16 years, including 25 measurements (average WBCs, 4.78 * 10^9 cells/L). The 2 red lines delineate the 3.5 – 6 range that was associated with an increased lifespan in the BLSA study (Ruggiero et al. 2007), and based on that, I’ve only had 1 measurement that was higher than that range. 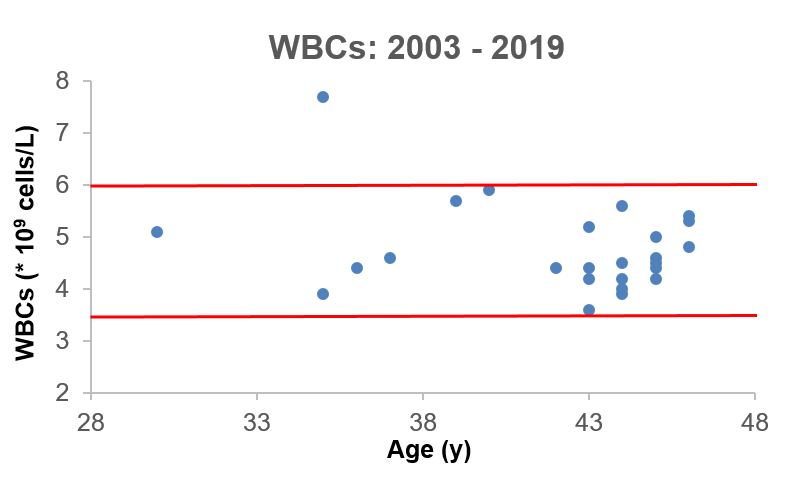 Starting from the red arrow below, WBCs increase during the 22-year period that precedes death (Ruggiero et al. 2007), so making sure that they don’t go up during aging is important!

My goal is to break the world record for lifespan, 122 years, which is currently held by Jean Calment. How do I plan to do that? A good start would be calorie restriction (CR), a diet where you eat 10-30%+ less calories than your normal intake. CR is the gold standard for increasing lifespan in a variety of organisms, including yeast, flies, worms, and rodents (McDonald et al. 2010).

With the goal of maximizing my health and lifespan, in April 2015, I started a CR diet. Inherent in that was weighing all my food and recording it on an online website that tracks macro-and micro-nutrients. From then until March 2016, I was pretty good at keeping my calories relatively low, as I averaged 2302 calories. However, since 3/2016, it’s been exceedingly difficult to keep my calories that low, as I’ve averaged 2557 calories/day. So is having a higher calorie intake worse for my lifespan goal than a lower calorie intake?

Maybe not. In addition to tracking my daily nutrition since 2015, I’ve also had regular blood testing performed. I’ve measured the typical things that you get at a yearly checkup, including the lipid profile (triglycerides, total cholesterol, LDL, HDL, VLDL) markers of kidney and liver  function (BUN, creatinine, uric acid, and ALT, AST, respectively), and the complete blood count (red and white blood cells, and their differentials). By tracking my daily nutrition and circulating biomarkers, I’m able to quickly intervene on any potential aging and disease-related mechanisms by using my diet to optimize my circulating biomarkers.

Although I wasn’t on a CR diet during that time, my average biological age was 29.2 years, which is ~34% younger than my chronological age. Would my biological age be even younger with a lower calorie intake? I’m working on reducing my calorie intake again (it’s not easy for me), so stay tuned for that!

Here are the my biomarker values corresponding to each blood test, for anyone who wants to double check the results:

If you’re interested, please have a look at my book: