If you’d like to support the channel, you can do that with the website,
Buy Me A Coffee:
https://www.buymeacoffee.com/mlhnrca

Papers referenced in the video
Inter- and intraindividual variability in daily resting heart rate and its associations with age, sex, sleep, BMI, and time of year: Retrospective, longitudinal cohort study of 92,457 adults
https://pubmed.ncbi.nlm.nih.gov/32023264/ 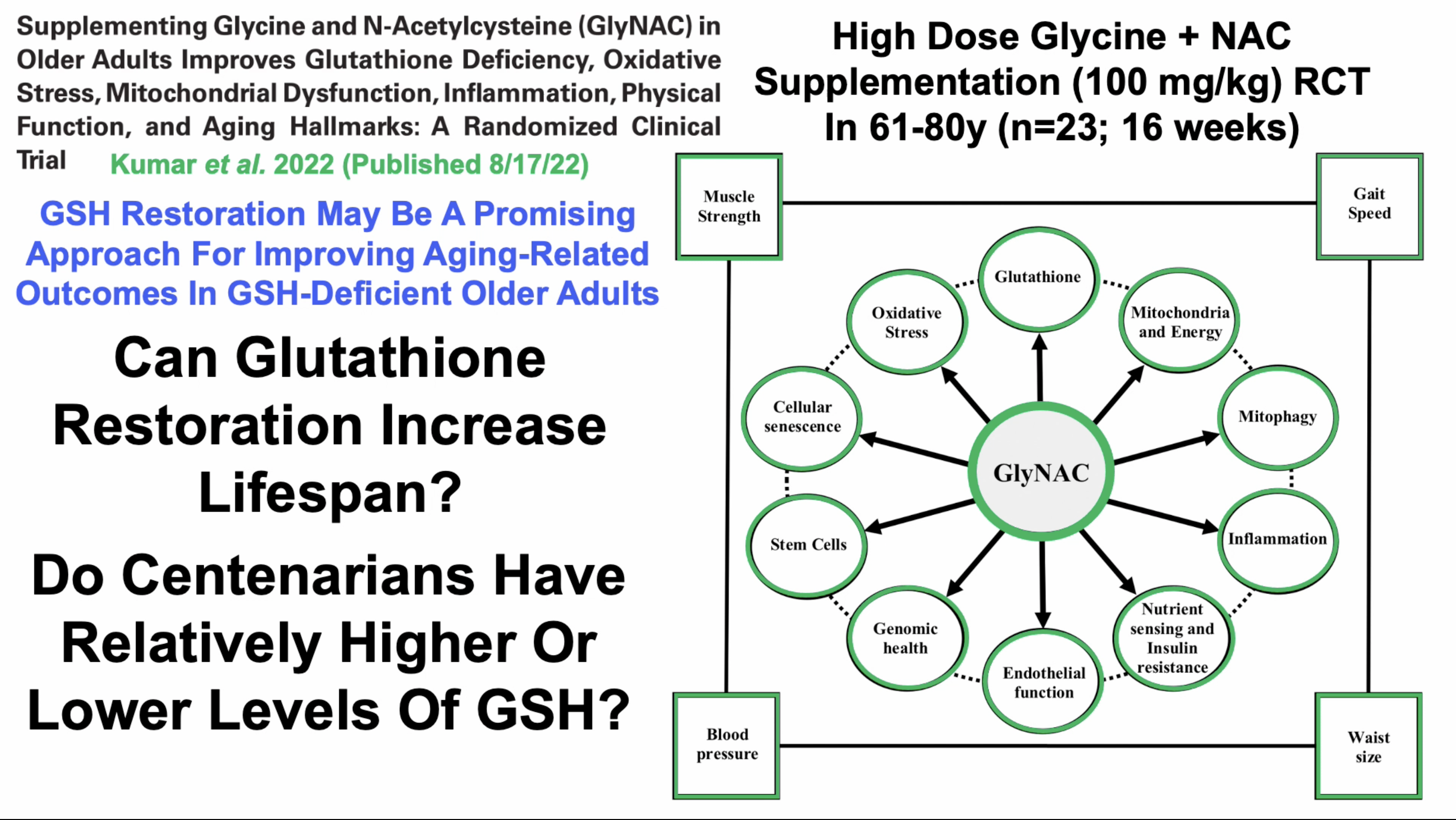 Glutathione declines during aging. To illustrate that point, let’s take a look at 3 different studies.

With these data in mind, can restoring glutathione levels in older adults improve health-related measures?

To optimize GSH, first we need to know what it’s made of. Glutathione is a tripeptide, which means that it’s made from 3 amino acids, including cysteine, glycine, and glutamate. When considering that glycine and cysteine levels (in blood) decline during aging (Sekhar et al. 2011), strategies aimed at restoring levels of these amino acids may be an important approach for restoring GSH in GSH-deficient older adults.

In 2022, similar data was published by the same research group (Kumar et al.). In that study, glycine + NAC (again using 100 mg each for glycine and NAC/kg body weight) supplementation in 61-80yr olds (n=11) for 16-weeks improved the same markers that were published in 2021, and impacted others, including improved markers of cell senescence, stem cells, mitophagy, blood pressure, waist size, and gait speed.

When considering the data from these 2 RCTs, GSH restoration may be a promising approach for improving health-related outcomes in GSH-deficient in older adults.

But, that’s not the purpose of this post. Can GSH restoration increase lifespan? Also, do centenarians (people older than 100y) have relatively higher or lower levels of GSH in blood?

First, glycine + NAC (GlyNAC) supplementation extends lifespan (in mice; Kumar et al. 2022). In that study, there were 2 groups of C57BL/6J mice, which were fed a either regular diet (no GlyNAC; 8 males, 8 females), or the regular diet supplemented with GlyNAC (8 males, 8 females), with amounts that were similar to that used in the 2 human RCTs. Supplementation started at 65 weeks of age (equivalent to starting ~40y in people), and when comparing 50% survival, which is the time when half the colony was dead and half was still alive, GlyNAC-supplemented mice had a 24% increased median survival, when compared with control-fed mice.

However, this study had some limitations. 16 mice per group is relatively small for lifespan studies-for example, see my 2 recent CR, fasting, and/or circadian alignment videos, where > 40 mice per group were used to evaluate lifespan. Additionally, no info was published about food consumption or body weight, which is important because if GlyNAC-supplemented mice ate less food than controls, that can explain the lifespan-extending effect. Mild calorie restriction (5%) can impact lifespan, so omission of food intake or body weight is potentially important.

In contrast, this study had strengths, including measuring GSH levels is several tissues-heart, liver and kidney. In those organs, there was a clear, age-related decline for GSH, but, aged mice that were supplemented with GlyNAC had significantly higher GSH when compared with unsupplemented controls. From this we can conclude that the lifespan-extending effect of GlyNAC supplementation is associated with GSH restoration in multiple tissues.

What about the data in centenarians? Earlier, we saw that GSH levels decline during aging, so is it reasonable to expect further declines in people that are 100yrs old (or older)?

In contrast, blood GSH levels were 48% higher in close-to-centenarians (average age, 97y, n=116) when compared with their offspring (average age, 67y, n=232; Xu et al. 2022). Collectively, when considering these data, the 2 human RCTs, and the mouse lifespan study, it suggests that relatively higher levels of GSH may be an important part of a pro-longevity strategy. Interestingly, each of GSH’s component amino acids were also significantly higher in the 97-yr olds, and likely explain the higher levels of GSH found in the centenarians of the Xu study.

Support the channel with Buy Me A Coffee!
https://www.buymeacoffee.com/mlhnrca

Sekhar et al: Deficient synthesis of glutathione underlies oxidative stress in aging and can be corrected by dietary cysteine and glycine supplementation https://pubmed.ncbi.nlm.nih.gov/21795440/

Xu et al: Metagenomic and metabolomic remodeling in nonagenarians and centenarians and its association with genetic and socioeconomic factors https://www.nature.com/articles/s43587-022-00193-0

For more info, join us on Patreon!

Join us on Patreon!

For more info about my attempts to biohack aging, check us out on Patreon!
https://www.patreon.com/MichaelLustgartenPhD

For those that are interested in ecxclusive content that I don’t share anywhere else, come join me on Patreon (https://www.patreon.com/MichaelLustgartenPhD) for daily updates on my data for RHR, HRV, sleep cycles, diet composition, macro- and micro-nutrient intake, and more!

Calorie restriction (CR) is well known to extend average and maximal lifespan in a variety of animal models, but what about in people? In this video, I present evidence showing that CR slows biological aging, which suggests that CR will positively affect lifespan in people.