Death from all causes was assessed based on the average value for four groups of Vitamin K1 intake: 171 ug/day = blue line, 276 ug/day =red line, 349 ug/day = green line and 626 ug/day = the yellow line. In the data above, Vitamin K1 values less than 349 ug/day are about the same in terms of all-cause mortality risk. However, those who ate 626 ug/day of Vitamin K1 had about half of the mortality risk compared to the lower K1 intake groups! Interestingly, the RDA for Vitamin K, at 90 ug/day seems to be outdated, based on the data above. Also, Vitamin K2 was not associated with all-cause mortality risk, as shown below:

Based on the K1 mortality data, 626 ug/day seems like a good goal. However, osteocalcin is a Vitamin K-dependent protein that has been shown to be maximally active in the presence of 1000 ug of Vitamin K1 (Binkley et al. 2002)! Osteocalcin is involved in pathways that decline with aging: insulin secretion and β-cell proliferation in the pancreas, energy expenditure by muscle, insulin sensitivity in adipose tissue, muscle and liver, and increased testosterone production (Karsenty and Ferron 2012). Therefore, getting 1000 ug+ per day of Vitamin K1 may optimize all of these functions and, decrease mortality risk!

What’s the take home from these data? Eat more leafy greens! How much is needed to get 1000 ug  per day? Shown below is a short list of foods rich in Vitamin K and the serving size needed to reach 1000 ug. Approximately 4 ounces of cooked kale or 7 oz. of raw spinach will suffice, and at a low calorie yield. Other foods, like broccoli, brussel sprouts or romaine lettuce would need to be consumed in far greater amounts to reach 1000 ug.

What’s my daily K1 intake? Shown below is my 7-day average (7/16/2015 – 7/22/2015) for K intake, derived almost exclusively from plant sources. 1379 ug/day puts me well above the 626 ug/day that was associated with reduced mortality risk, and above the 1000 ug/day needed for maximal osteocalcin activation.

If you’re interested, please have a look at my book!
https://www.amazon.com/dp/B01G48A88A?ref_=k4w_oembed_omIChDjq2EkggX&tag=kpembed-20&linkCode=kpd

NR and NMN are popular ways to try to boost levels of NAD+, but that approach hasn’t worked every time in human studies. One reason for that may involve CD38, which degrades both NR and NMN. With the goal of boosting NAD+ levels during aging, why does CD38 increase with age, and what can be done about it? All that and more in this video!

Blood urea nitrogen (BUN) is one of the 19 variables found on the biological age calculator, aging.ai. It measures the amount of nitrogen, as contained in urea (i.e., blood urea nitrogen, BUN) in your blood. The reference range for BUN is 5 – 20 mg/dL, but within that range, what’s optimal? 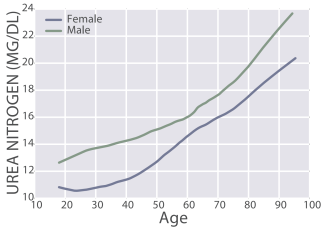 The importance of the age-related increase in BUN is illustrated by the finding that risk of death for all causes increases above 15 mg/dL:

Also note that maximally decreased risk for all cause mortality was associated with BUN values between 5 – 15 mg/dL. In addition, even though a BUN value = 20 mg/dL is technically within the reference range, risk of death for all causes would be 50% higher when compared with someone that had BUN levels between 5 – 15 mg/dL. Collectively, based on the aging and all-cause mortality data, I’d argue that 5 – 13 mg/dL may be the optimal range for BUN.

Assuming normal kidney function (see https://michaellustgarten.wordpress.com/2019/11/18/optimizing-biologic-age-creatinine/), if your BUN is higher than 15 mg/dL, can it be reduced? Note that urea production is almost perfectly correlated (r = 0.98) with dietary protein intake (Young et al. 2000):

In other words, the main source of dietary nitrogen is protein, so if you eat a lot of protein, you’ll make a lot of urea. Circulating levels of urea can be easily calculated by measuring BUN, via: Urea [mg/dL]= BUN [mg/dL] * 2.14). Therefore, measuring BUN can then be used to determine if your protein intake is too high or too low.

What’s my BUN? As shown below, I’ve measured BUN 22 times since 2015. In line with the Young et al. (2000) data that showed an almost perfectly linear correlation between dietary nitrogen intake with urea production, similarly, as my dietary protein intake has increased, so have my BUN levels. The correlation between my dietary protein intake with BUN is strong (r = 0.76, R^2 = 0.575, p-value = 4.3E-05):

Consistent exercise training would seem like the obvious choice to reduce resting heart rate (RHR) and to increase heart rate variability (HRV). Are there other factors that can impact these variables? Body weight and daily calorie intake may affect RHR and HRV, and in the video I present 700+ days of data for these correlations.

To determine what’s optimal for resting heart rate and heart rate variability, I review the published literature for how they change during aging, and what’s associated with mortality risk. Also included are my data over the past ~2 years, to see how I compare against the literature.

In an earlier video, I presented data for total cholesterol (TC) levels in blood in terms of changes during aging and all-cause mortality risk. I’ve measured TC 25 times in the past 5 years, and in this video, I present that data, and my approach to optimize it.

How much Vitamin C (ascorbic acid) is optimal for health? To answer this question, I’ll examine the association between circulating levels of Vitamin C with all-cause mortality risk. Then, which dietary Vitamin C intake corresponds to optimal plasma levels? Let’s have a look!

A variety of studies have investigated associations between plasma (or serum) Vitamin C with all-cause mortality risk:

Collectively these studies show that low circulating levels of Vitamin C may be related to an increased mortality risk, whereas plasma values greater than ~50 uM are consistently associated with reduced all-cause mortality risk. How much dietary vitamin C is required to attain 50 uM+?

As shown below, the RDA for dietary Vitamin C is 90 mg for males and 75 mg for females older than 19 years (Institute of Medicine 2000). 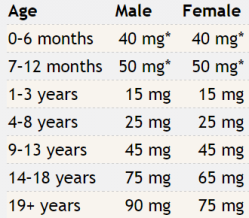 Which foods are  Vitamin C-rich? As shown below, sweet peppers (yellow, red, and green) are the All-Stars for Vitamin C content per 100 calories: 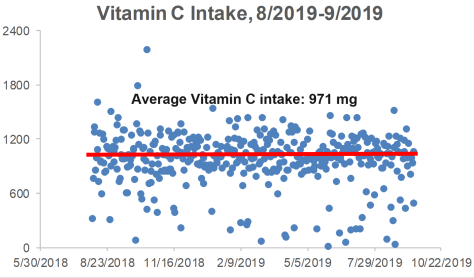 Note that I don’t supplement with Vitamin C, and that amount is completely from food. Also, I generally split my Vitamin C intake throughout the day, with about 2/3 in the morning and the remaining at night, to try to keep my circulating Vitamin C levels relatively saturated at > 70 uM. I haven’t measured my circulating C levels (yet), but that’s on the to do list!

With the goal of optimizing plasma levels of Vitamin C, it is also important to monitor dietary sodium intake. Intestinal absorption of Vitamin C requires dietary sodium (Friedman and Zeidel 1999). As shown below, 1 ascorbate ion (asc-) is absorbed from the intestinal lumen into intestinal epithelial cells in the presence of 2 sodium (Na+) ions. Vitamin C can then diffuse into the blood as Asc- or as dehydroascorbate (DHA): 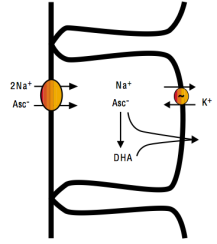 Accordingly, based on my average dietary Vitamin C intake of 971 mg/day, to maximize absorption, a corresponding dietary sodium intake of 1940 mg would also be necessary.

These data are now in video format!

Fletcher AE, Breeze E, Shetty PS. Antioxidant vitamins and mortality in older persons: findings from the nutrition add-on study to the Medical Research Council Trial of Assessment and Management of Older People in the Community. Am J Clin Nutr. 2003 Nov;78(5):999-1010.

An adequate daily intake of Vitamin K1 is 120 and 90 micrograms/day for males and females, respectively, but are those amounts optimal for health? In this video, I present evidence that consuming more than 1000 micrograms of Vitamin K1/day may be optimal.