Neutrophils, lymphocytes, and monocytes account for ~99% of WBCs, and accordingly, in the video I propose optimal ranges for these cell types in terms of health and longevity.

My latest blood test results are in-how’s my biological age?

In the video I discuss my dietary approach prior to my latest blood test, the blood test results, and my plan to improve them with diet going forward.

After going on Joe Rogan’s podcast, Paul Saladino, MD, posted his show notes, which included his blood test results. Based on that data, is his biological age optimal while on a carnivore diet?

In this video, I discuss data for 6 blood test measurements since 2018 that show a Phenotypic (Biological) Age that is ~14 years than my current age (47y).
https://youtu.be/85t8vmIgR6s

What are the blood biomarkers of a centenarian, and is there room for improvement? Find out in the video below!

In the first 45 minutes, discuss each of the biomarkers contained within Levine’s Biological Age calculator, Phenotypic Age.

After that, I answer questions from the audience and we discuss all things related to aging.

Exactly 1 month ago, my first biological age measurement of 2020 was 32.75y (https://michaellustgarten.wordpress.com/2020/02/14/biological-age-32-75y-chronological-age-47y-first-2020-measurement/). When considering that my chronological age is 47y, that’s a 14 year improvement, but I wasn’t (and still aren’t) satisfied. When I sent my blood for analysis, I was battling a mild upper respiratory infection (cough, no fever), which likely raised my WBCs, thereby resulting in a higher biologic age. Also, I was experimenting with a higher intake of meat, eggs, and cheese, to see what affect that it would have on my circulating biomarkers. On that blood test in February, my creatinine levels were higher than my 2015-2020 average value, and if those foods were associated with circulating levels of creatinine, reducing them should also reduce creatinine, and accordingly, further improve my biological age. I also assumed that all other variables on Levine’s Phenotypic Age calculator would be unchanged.

Because I track my diet every day, I can investigate the correlation between my meat, eggs, and cheese intake with creatinine. I now have 8 blood tests that correspond to dietary data, and interestingly, there is a moderately strong correlation between my average daily beef+egg+cheese intake with creatinine (r = 0.55). Based on these data, I’m going to continue to minimize consumption of these foods, with the goal of optimizing creatinine. 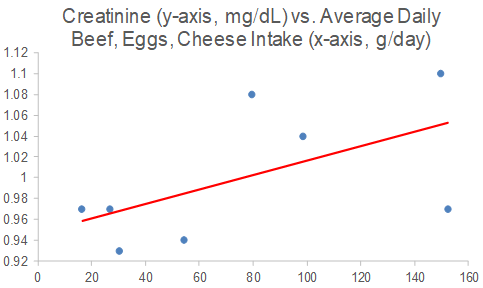 On a final note, I also expected to further reduce my CRP from 0.3 to something lower, but it slightly increased to 0.37 mg/L. While that is far from a high value, lower is better, and in future blood tests I’ll try to figure out how to further reduce it.

If you’re interested in calculating your biological age, here’s the Excel link:

The percentage of lymphocytes is one of the 9 blood test variables included in the biological age calculator, Phenotypic Age (https://michaellustgarten.wordpress.com/2019/09/09/quantifying-biological-age/). The reference range for lymphocyte % is 20 – 40% of the total amount of white blood cells (WBCs), but are higher or lower values optimal for health and longevity?

To answer that question, it’s important to know how levels of lymphocytes change during aging, and its association with risk of death for all causes. In one of the earliest studies to examine how the percentage of lymphocytes changes with age, Levine (2013) reported that lymphocyte % significantly decreased during aging in 9,389 adults (age range, 30 – 75y). However, the absolute values for these changes, i.e. from 40% to 30%, for ex., was not reported.

Based on the aging data, higher values for lymphocyte % are are associated with biologic youth, whereas lower values are found in older adults. Although there are few studies that have investigated associations between lymphocyte % with aging or disease risk, in contrast, more studies have been published for absolute levels of lymphocytes.

Collectively, these data suggest that higher values for lymphocyte % and for the absolute amount of lymphocytes may be optimal for minimizing disease risk and for maximizing longevity. If both are low, can they be raised? Circulating levels of lymphocytes are reduced during zinc deficiency (Fraker and King, 2001), so monitoring zinc intake, then increasing it to at least the RDA may be a first step towards increasing lymphocyte levels and %.

Fraker PJ, King LE. A distinct role for apoptosis in the changes in lymphopoiesis and myelopoiesis created by deficiencies in zinc. FASEB J. 2001 Dec;15(14):2572-8.