Join us on Patreon! https://www.patreon.com/MichaelLustga…

Levine’s Biological age calculator is embedded as an Excel file in this link: https://atomic-temporary-71218033.wpcomstaging.com/2019/09…

Linoleic acid (C18:2, n-6) is an essential fatty acid that must be obtained from the diet, because  our body can’t make it. How much linoleic acid should we eat every day for optimal health? To answer this question, I’ll investigate the association between circulating levels of linoleic acid with all-cause mortality risk, followed by identification of a corresponding dietary intake. Let’s have a look! 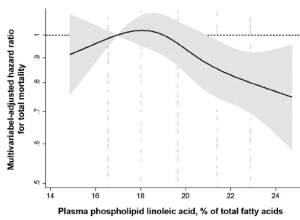 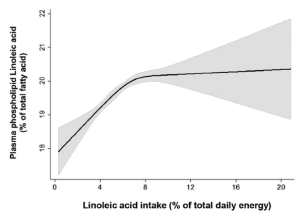 Just using walnuts alone, I’d need ~700 calories per day to reach 14% dietary linoleic acid! Although I’m always interested in dietary strategies that may reduce all-cause mortality risk, allocating ~30% of my daily calories to only walnuts is not ideal for my high-fiber approach to health (https://atomic-temporary-71218033.wpcomstaging.com/2015/07/17/on-a-paleo-diet-not-if-you-fiber-intake-is-less-than/), nor would it satiate me, as high-volume vegetable meals are best for that. A more reasonable dietary linoleic acid target (for now) is ~8%, the point at which plasma linoleic acid mostly plateaus (see the plot above). 8% on my 2300 calorie diet translates into 20 grams of linoleic acid per day. I should note that I also get a good amount of linoleic acid (6.4 grams) from the 30 grams of sesame seeds that goes into my giant salad’s dressing, which I eat 2-3x per week. When combined with ~300 calories from walnuts/day, that gets me to at least 8% of my daily calories from linoleic acid.