Papers referenced in the video: Laboratory parameters in centenarians of Italian ancestry https://pubmed.ncbi.nlm.nih.gov/17681733/

Risk Factors For Hyperuricemia In Chinese Centenarians And Near-Centenarians https://pubmed.ncbi.nlm.nih.gov/31908434/

Association of Hemoglobin Concentration and Its Change With Cardiovascular and All-Cause Mortality https://pubmed.ncbi.nlm.nih.gov/29378732/

Association of the Aspartate Aminotransferase to Alanine Aminotransferase Ratio with BNP Level and Cardiovascular Mortality in the General Population: The Yamagata Study 10-Year Follow-Up https://pubmed.ncbi.nlm.nih.gov/27872510/

Age-related changes in clinical parameters and their associations with common complex diseases https://pubmed.ncbi.nlm.nih.gov/26623014/

Liver enzymes and risk of all-cause mortality in general populations: a systematic review and meta-analysis. https://pubmed.ncbi.nlm.nih.gov/24585856/

The reference range for uric acid is 4.0 – 8 mg/dL for men, and 2.5 – 7 mg/dL for women. Are these values optimal for health? To answer that question, let’s have a look at how circulating levels of uric acid change during aging, and their association with risk of death for all causes.

In terms of mortality risk, lowest risk of death for all causes was associated with uric acid levels of 5 – 7 mg/dL for men and 4 – 6 mg/dL for women in the 9,118 adults (average age, 43y) of Hu et al. (2019). Also note the U-shaped curve for both genders, whereas mortality risk increases at both low and high levels of uric acid: 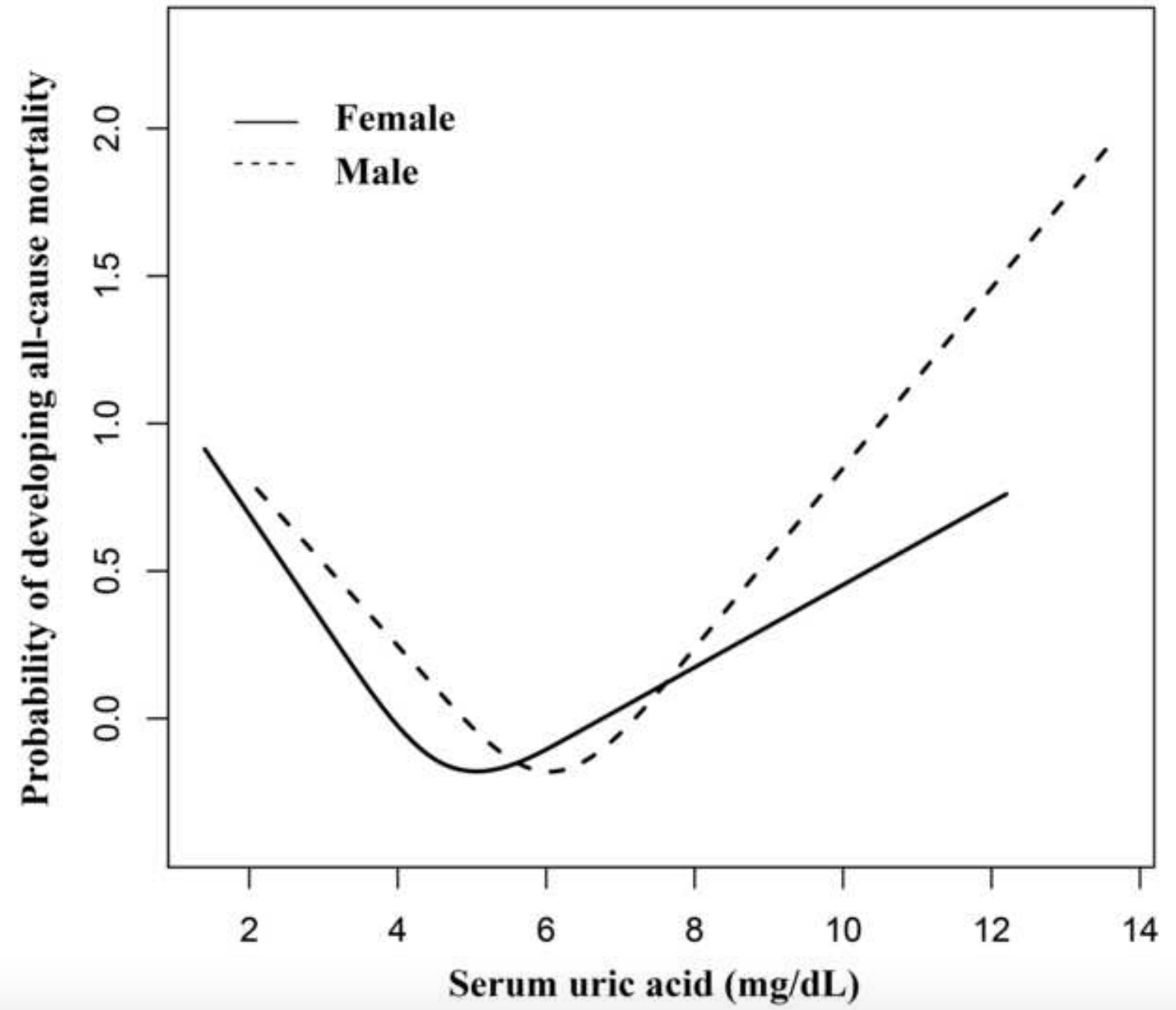 Similarly, the lowest risk of death for all causes was associated with uric acid levels of 7 mg/dL for men, and 4 mg/dL for women in the 375,163 adults (average age, 40y) of Cho et al. (2018), with mortality risk significantly increasing at uric levels < 3.5 and > 9.5 mg/dL for men, < 2.5 and > 7.5 mg/dL for women. Collectively, these 2 studies in middle-aged adults suggest that uric acid levels ~ 4 mg/dL for women and ~7 for men may be optimal for reducing risk of disease for all causes. It’s also important to note that both low and higher values are associated with an increased mortality risk.

The data for the Hu and Chu studies are in younger adults, so how does the data look in older adults? Lowest all-cause mortality risk was associated with uric acid levels between 4 – 5 mg/dL in the 121, 771 older adults (average age, 73y) of Tseng et al. (2018), with mortality risk significantly increasing below 4 and > 8: 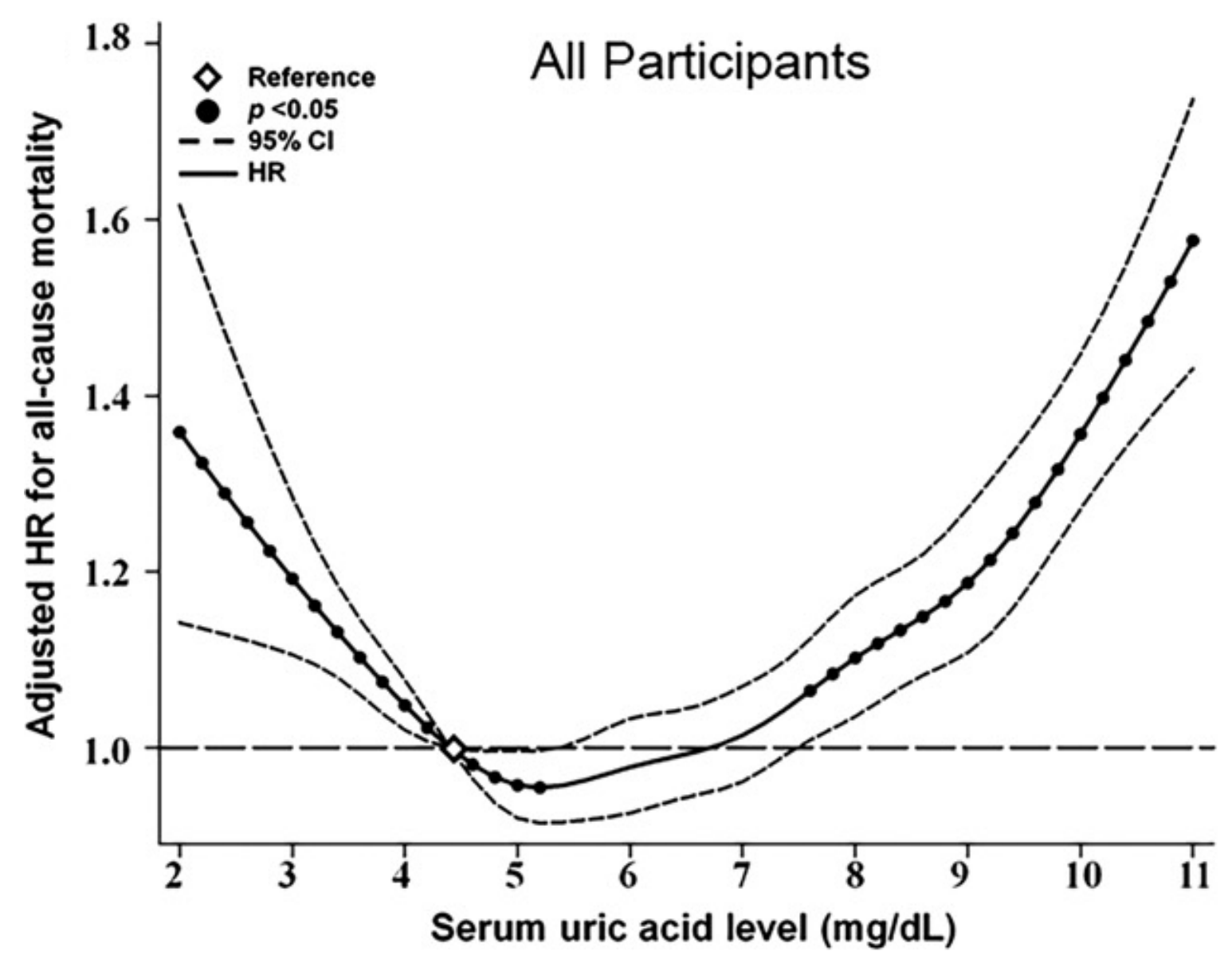 What are my uric acid levels? From 2016 to 2018, I measured it 15x, and although my average value of 5.2 mg/dL is not too low or too high in terms of an increased all-cause mortality risk, it increased during that 3-year period (R2 = 0.2886). When considering that uric acid increases during aging, can I reduce it with diet? 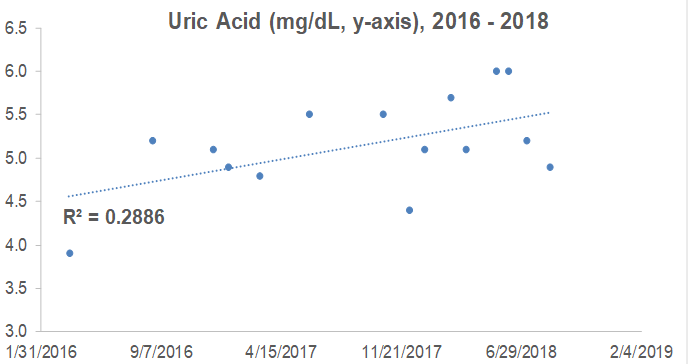 Because I track my daily nutritional intake, I can look for correlations between my dietary intake with circulating biomarkers. Interestingly, a moderately strong correlation between my lycopene intake with uric acid (R2 = 0.3343, p=0.024) was present from 2016 to 2018: 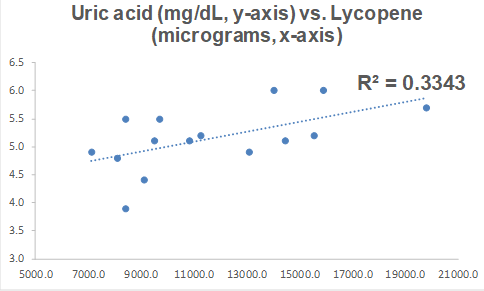 Lycopene is found almost exclusively in tomatoes and watermelon. If these foods are related to my increasing levels of uric acid, if I ate less of them, I’d expect to see a corresponding decrease in uric acid. So, in 2019, I ate less of these foods, thereby reducing my average lycopene intake from 11,585 to 9,132 micrograms per day. How did that affect circulating levels of uric acid?

In 6 measurements for 2019, my average uric acid level was 4.6 mg/dL, a value that was significantly different (p=0.02) from the 2016-2018 average of 5.2 mg/dL. Whether eating less watermelon and tomatoes caused the decrease is unknown, but it’s good to know that uric acid can be potentially modified with dietary change!